Would you eat this?!

Your first thought might be, “Are you crazy? How could being forced to eat out every day be negative?” Believe me, after 11 months travelling it starts to grate on you.

If you’ve just started your trip you’re probably enjoying the luxury of eating out all the time. It was also very exciting for us! On a backpacker budget we found ourselves having to be strict not to spend too much too fast. 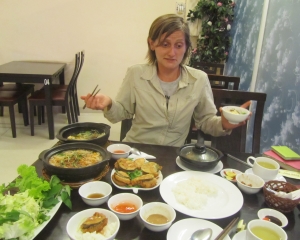 What a feast! Delicious food in Vietnam

As a vegan traveller, there have been some inevitable annoyances when it comes to eating out. Vegan food is not labelled on every menu around the world, so when you’re travelling you have to try harder to get what you want.

But is it hard travelling as a vegan? When people ask me at home in England if I struggle when I eat out, the answer is always no. I go to the places where I know I can eat and if I go somewhere new I might call up in advance.

Whilst travelling however, it has proved to be a struggle in some destinations.

Ultimately, I’m not fed up of eating out because I’m a vegan. I would still feel negative about the situation if I had more choices.
Basically, I miss being in control of my diet. 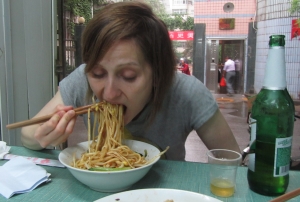 The best noodles ever in China!

Of course I always manage to find something to eat, but there are times I feel I am eating out of necessity, not for pleasure.

Myself, as well as other vegans and those with allergies have the added annoyance of making sure the food is suitable for our diets and by properly preparing to travel as a vegan. To do this you either need to know the local lingo or hope the waiter speaks enough English to grasp your needs.

I miss the freedom of choosing what I eat and not being in the hands of a chef that doesn’t understand my diet and beliefs. Sometimes I wish I could just cook up some pasta and open a jar of sauce. In some restaurants, something so simple to me like pizza or pasta can come out so disastrously wrong. Also these options tend to be twice the price of the local food.

We were in Lijang, China, and Stu and I ordered a sandwich each from our hostel. Mine was a very simple salad sandwich and Stu’s was a BLT. I went through my requirements very meticulously with the chef and explained I was a strict vegan. When our sandwiches arrived I opened mine to check it was made to my requirements. “What have you done to it?!” I said. The bread was covered in bacon fat! The chef said it was because he cut the bread with the same knife… This couldn’t of been the case, as both sides were drenched in oil. He must of fried my bread in the same pan as Stu’s bacon. Why he didn’t do it properly the first time baffles me, as he had to make it again to my original order!

Yummy burgers and chips in Thailand!

Bored of the choices?

Not every country is lucky enough to have such a variety of foods as we do in the west. When curry, rice or noodles with a couple of variations are the only options on the menu in the whole country, it can start to get very boring.

Recently we’ve been trapped in some small towns in India due to illness, and having only 2 or 3 restaurants to eat in can be very limiting. Being ill can give you a loss of appetite, which makes eating a lot harder. A spicy curry is not always what you want when you’re suffering from diarrhoea and sickness!

Choosing your order is one thing, but having clean plates and cutlery is another. Some of the hygiene levels we’ve seen would turn your stomach. But when there are no other options, you have no choice but to turn a blind eye.

I’m trying not to sound too negative as I love eating, but I miss cooking what I want to eat. Having to go out to a restaurant every meal time to choose off someone else’s menu gets very frustrating.

I would love to hear if anyone else has experienced these feelings so I’m not left thinking it’s just me being weird!

My Vegan Experience in Pushkar, India
10 Common Mistakes When Travelling
What is Kai Pen? The Delicious Vegan Snack from Northern Laos!
Travel Photo Essay: Exploring the Markets of Mysore

Travelling by Bus From Beijing to the Mutainyu Great Wall
Day 328: A Ferry Ride on Kerala’s Backwaters