What trip to Beijing would be complete without a day trip out to the Great Wall of China? Being so close to the city it would be criminal not to go and visit one of man’s most astonishingly massive creations!

Don’t get ripped off by a tour operator in Beijing. Get there yourself!

We had a bit of a nightmare trying to organise a day out to the Great Wall. We wanted to go to a quieter section of the wall called Mutainyu, away from the hordes where we could hopefully spend some time on the wall in peace! We’ve written about how we eventually got the public bus, and stuck our middle finger up at the tour operators!

Having booked with a tour agency on the same road as our hostel for the sum of 150RMB (without lunch, and haggled down). We would soon learn this was a massive mistake.

The following morning we were driven to a coach park with an exceptional grumpy tour guide, then told we had to join another tour group. We were met by another guide who informed us that we were now driving to the Balatong section of the wall (which I knew would be very crowded and touristy), for a one hour visit, then visit a Jade factory and various tea houses on the way back…She also went on to inform us that a 100RMB tip was compulsory for herself and the driver! Suffice to say, after nearly causing an international incident, we made our way back to the tour office and demanded our money back.

After being stung like this, we decided to organise our trip and transport to Mutainyu ourselves, adding to the overall sense of adventure!

A quick Google search came up with Vagabond 3’s very informative first hand account of their bus journey from Beijing to Mutainyu on bus number 936. His description is spot-on, and without it we would not have found our way there. (Read his comprehensive guide here.)

We were inspired to write our own guide of our experiences and build upon Vagabond’s original post.

How to catch the bus to the Mutainyu Great Wall! 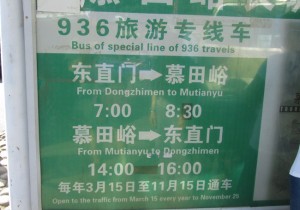 The Vagabond guide warns that the stop you need to get off at is not the last on the bus route, Hong Luo Si, as advertised at the actual bus stop and on the bus itself.

You will arrive at what appears to be the last stop. The driver will disembark along with a large section of people from the bus. There are hawkers and street sellers everywhere, adding to the confusion and doubt flowing through my mind as I thought we must be Mutainyu.

We did what the Vagabond guide said not to do: Look around in panic for signs of a ‘Great Wall’ somewhere in the distance. To top it, when the new driver started up the bus, he drove back the way we’d came! Luckily we hit a sharp right and started ascending upwards on the last leg of the journey that took 15 minutes or so.

You’ll know when you get to the top as coaches and cars are parked up and there’s a massive Great Wall Mutainyu! sign.

We headed upward towards the ticket office, choosing the ‘ski lift’ option to get up to the wall in style, as well as paying for the Toboggan ride back down the mountain – something I was highly looking forward to! I paid 110RMB and Eloise 90RMB with a UK ‘Student’ card. (6/5/11)

The wall was truly excellent, and the sun shone on us all day. If we had gone the previous day we would have got drenched. I couldn’t believe the severity of the steps! 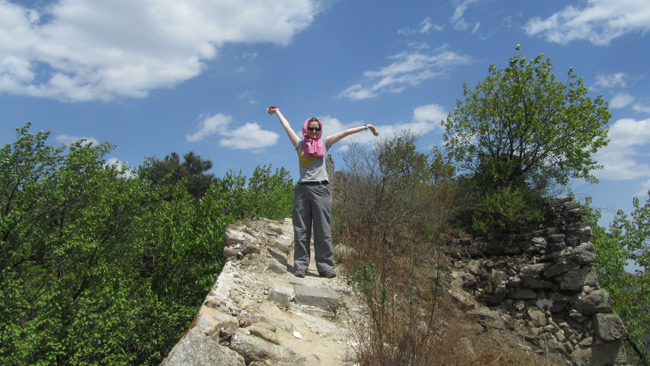 Undeveloped part of the Mutainyu section 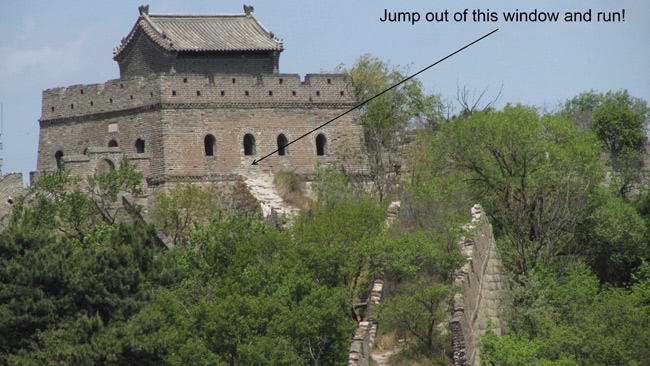 Arriving at the highest point on the Mutainyu walk, we saw a slightly worn footpath out of one of the turret windows looking north.

When no one was looking we made a run for it, jumping down through the windowless turret and towards another junction in the fortification on the wall.

This section was totally undeveloped and was really exciting to walk down, but a bit dangerous in parts! 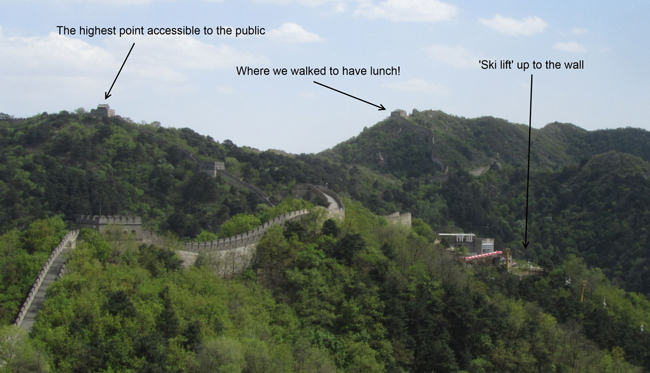 Taken from the end point, you can see where we walked and had lunch!

We walked for a kilometre or so and stopped for our packed lunch in an ancient corner of the wall with commanding views of the surrounding mountains in all directions – totally undisturbed and isolated. I could almost imagine the guards on the watch tower hundreds of years ago hoping the Mongol invaders don’t come in their sleep! 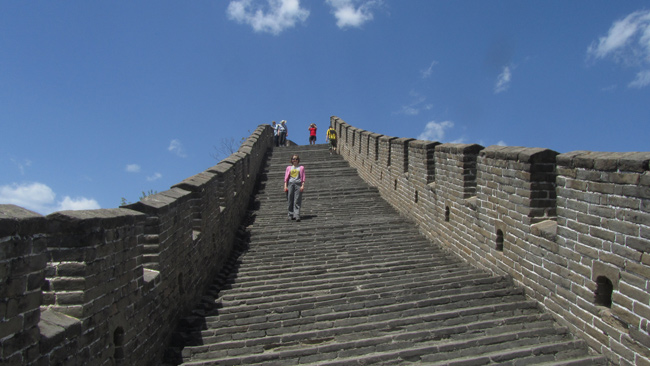 Although officially not recommended, it was amazing to divert from the beaten-track and experience a part of the wall not seen by the masses. It just takes quick legs and a moment of peace and quiet to make a dash for it! 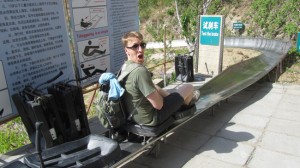 With the Toboggan Ride decent back down to the ticket area, we prepared ourselves for what looked like a ride one could not usually partake in back home in the UK due to various Heath and Safety laws.

The ride is highly recommended! You can control the speed in which you hurtle down the 1500m(!) stainless steel slide simply by yanking back on the lever which applies a brake, or pushing fully forward to achieve break-neck speed! Attendants tactically located at near-death bends will shout commands of “Brake!”, but I’m sure most of you, like me, will ignore them!

Key Tips on how to get the Bus!

In my opinion it’s definitely worth the effort of making your own way to the Great Wall and not arranging a trip with a tour company. We heard many subsequent stories of people getting conned on their trips, with very little time on the wall, and hours spent in Jade factories and tea houses!

Travel Photo of the Day: Winter Blossom at the Great Wall of China
Exploring the Bolaven Plateau by Motorbike! Part 2
Passing Through Pakse? Our 'Stay Longer' Mini Guide!
A Week in Weird and Wonderful Wuzhou!

Day 326: Leaving Varkala
The Negative Side of Travelling #1: Eating Out Every Day