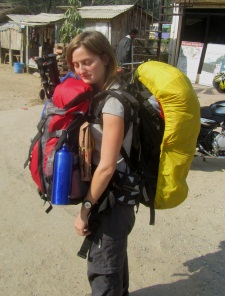 Hummm maybe a bit too much luggage!

With my place on a Laughter Yoga Teaching Course secured, I had to get myself to Bangalore. Stu I had been travelling almost a year by this point, and had never been apart for even a day! Is that healthy?!

So, I was about to deal with new experiences, new feelings, and having to be a new grown up woman travelling all by herself in crazy India.

I’d heard of all the stereotypes of being stared at and groped by Indian men. Also not being acknowledged or respected as a woman. This was not something I was looking forward to!

I had pre-arranged an auto-rickshaw before Stu and I said our goodbyes in Hampi, 9 hours north of Bangalore.

The driver had acted friendly and genuine and I felt safe about travelling alone with him late at night. However, when I went back to meet the driver, he had turned weird. He barely communicated when I greeted him, and he watched me struggle with my bags. He said he didn’t realise it was just me he was taking.

Before we left Hampi he pulled over by a chai stand, and said something confusing about his usual fare being a lot more, and did I understand what he was saying. He made me feel uncomfortable. Throughout the journey he was moaning about how tired he was, but it was only 7pm! I kept my penknife close, just in case!

I was getting a sleeper bus to Bangalore City. I was worried it would be an awful experience and the roads would be in bad condition. Surprisingly, the bus felt like luxury, compared to Indian trains and I even had a bit of privacy with my own curtain!

I had to get used to thinking for number one, being brave and keeping myself entertained.

It would appear that staring is acceptable in Indian culture. This can be very uncomfortable for western travellers, especially if you are on your own. Luckily the people on my bus didn’t seem that interested in me and just wanted to sleep.

Arriving into an unknown place in Bangalore, in the early and dark hours of the morning was an unpleasant start to my long day.

I was thrown off the bus by the side of the road and didn’t know where I was or where to go. And most frustrating, I didn’t have any small change for the notorious rip-off rickshaw drivers!

Not having a clue what to do, I found my way to a safe and comforting environment at 5am- Bangalore’s International Airport. I sat there for 2 or 3 hours, eating subway sandwiches and drinking strong coffee, while trying to figure out what I was going to do for the rest of my day.

It felt strange having to make decisions all by myself, without confiding in Stu. I wanted a moment to myself before I ventured out the airport to be bombarded by touts and taxi drivers. There was also a nagging thought that I was already spending a lot more money being by myself. 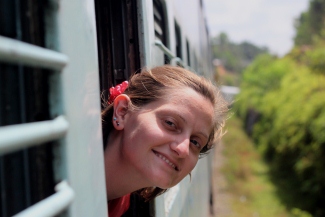 On a sleeper train in India

I got dropped of at a ‘budget’ hotel not far from the airport. It was very expensive for Indian prices, but it was close to my course that was starting the following day.

So with peace of mind that I would get to my course on time, I could now relax and prepare for the course.

I was so excited about getting to the retreat and starting my Laughter Yoga Teaching Course. I had arranged a non-English speaking auto-rickshaw driver with the man from the corner shop.

The next morning to my amazement, the driver not only turned up on time, but managed to drive me to my destination with only a few wrong turns and communication issues! I didn’t help by loosing the retreats address!

My Laughter Yoga Teaching Course was a complete success! I was taught by the creator of this unique concept. I learnt a lot of new and exciting things. And going on the course has reconfirmed that I love laughter yoga and would like to pursue a career teaching it. 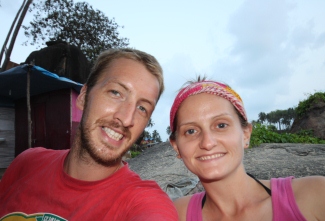 I had already pre-booked my sleeper train out of Bangalore for the night following my course.

I was really looking forward to seeing Stu again and relaxing on a beach in Goa. Nobody was able to get on the wrong side of me that evening!

Stu and I have now been reunited and are currently kicking back on Palolem Beach in Goa. I am so happy to be back with my travel buddy.

But, I have definitely been through a learning curve travelling alone as a girl in India.

I feel confident that I could do it again. I would say that the positives to travelling alone are that you communicate with other people much more– travellers and locals. You have to think for yourself, which makes you independent. And you have the freedom to do more of the things that you want to do.

Everyone should try a bit of solo travel!