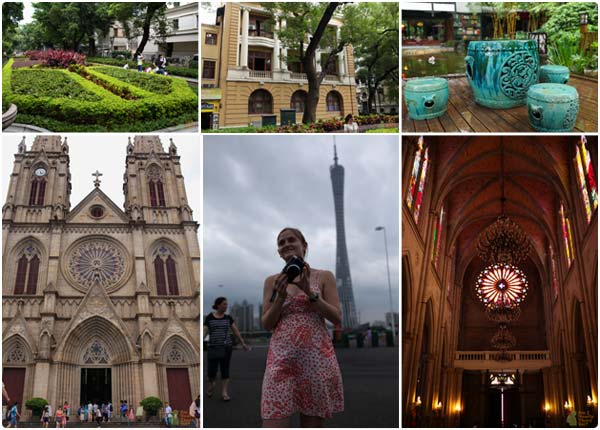 We’d totally written off Guangzhou on our first attempt in the southern city nearly 2 years ago during our first visit to China, just passing through its huge train station on the way to Yangshuo from Hong Kong. Guangzhou is China’s 3rd largest city, but not that popular on the traveller trail. We want to change that!

Eloise’s brother Nathan, i.e. the Lost Brit, who lives in Wuzhou a few hours outside of Guangzhou had only good things to say about the city. So we felt Guangzhou deserved another chance. We were pleasantly surprised!

Guangzhou, previously Canton, was a hotbed during the British colonial period because of its coastal location. Its proximity to Hong Kong also helped the settlers establish trade routes into mainland China.

(Look at me pretending I know what I’m talking about. Check out the Wikipedia entry for more info!)

The European settlers left their mark on the architecture in certain parts of Guangzhou, especially on Shamain Island. The Brits and Frenchies originally shared the strategically secure island, then other trading companies came from around the world to operate and reach further into the China mainland.

Things to do in Guangzhou!

So, history lesson over. Here’s some of the things we did that we recommend you do in Guangzhou! 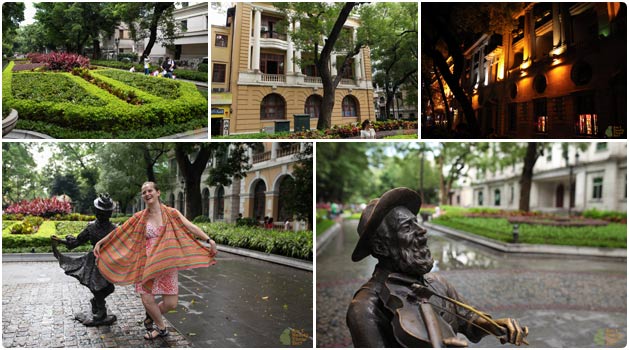 It’s all about the architecture on Shamain Island. Trading companies built exceptionally grand buildings. As well as ambling by amazing consulates and embassies, enjoying the beautiful gardens and leafy trees, there’s an all-important Starbucks.

It really feels like your walking through parts of London, it’s only the warmth and the near constant sound of people hocking up phlegm that gives it away. 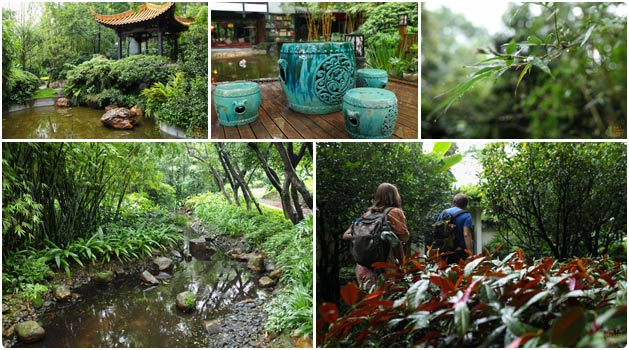 Hilariously, during our visit there were ZERO orchids. It’s still a nice escape from the busy streets for an hour. The pretty gardens are really quiet, and there’s some lovely tea houses tucked away in if you like Chinese tea. Which I don’t.

Check out the Canton TV tower

Once you battle off the photographers trying to sell you candid shots of you in front of it, the Canton Tower is an epic sight. The largest structure in China and fourth largest in the world (thanks again Wikipedia), it’s a real neck-acher.

It’s actually a TV tower, but it’s got some tourist attractions to check out: Like a drop roller-coaster, observatory, a couple of revolving restaurants and some other ridiculous stuff.

We planned a budget tactic of going for a coke and tap water, but one of the restaurants had a 600 Yuan (£60) minimum spend. So we were limited to just looking up at it, rather than down on the rest of Guangzhou. Never mind!

Take a Stroll to the Sacred Heart Cathedral

Getting there through one of the market districts was a pain, but when you see the Sacred Heart Cathedral it’s worth it! An all granite monster, very rare worldwide apparently (Wikipedia, we love you!), the locals named it the ‘Stone House’. It’s another amazing piece of Guangzhou’s history.

Guangzhou is definitely worth a visit, and is more (western) tourist friendly than other Chinese cities we’ve been to. We’re glad we gave it a second chance! The metro is great, there’s excellent transport links all around the country and is only a couple of hours by train from good ol’ Hong Kong.

Travel Photo Round-up: Guangzhou!
Cheap Things to do in Paris!

2 Responses to Give Guangzhou Another Chance!