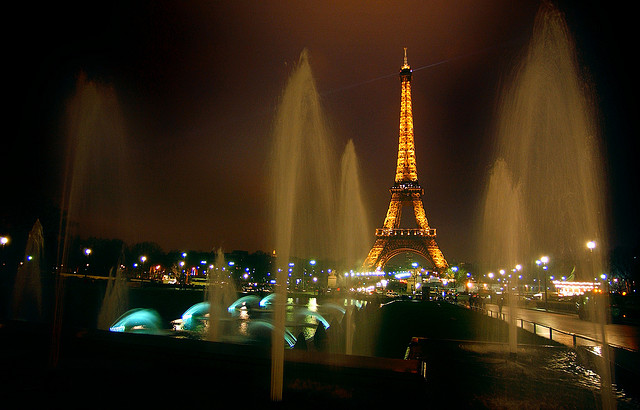 Paris is a city of romance, and a city of history! It has so much to offer the visitor; you’ll be spoilt for choice.

Impossible to miss, the Eiffel Tower, originally intended as a temporary structure built for the 1889 Paris Exhibition, dominates the Parisian skyline and gives a unique view of the city from its top.
If art is your thing, Paris is home to two of the most famous art museums in France, the Louvre and the Musee d’Orsay. The Louvre, keeper of Da Vinci’s most famous painting, the Mona Lisa, is mainly devoted to art from the Middle Ages through to the mid-nineteenth century. The Musee d’Orsay takes over where the Louvre leaves off, with an unsurpassed collection of Impressionist paintings, and a notable Van Gogh gallery.
For remarkable religious architecture, there is the Basilique du Sacre-Coeur, perched high on a hill, offering a panoramic view of Paris. Notre Dame, a world famous structure of Gothic design, sits at Paris’s center.

For those seeking fine dining destinations, there is the glamorous Le Meurice in the heart of Paris. Here classic French dishes based on the recipes of the master chef Escoffier are brought bang up to date, and are given a modern twist in opulent surroundings. Alternatively, there is the L’Astrance with its very modern menu. Booking is essential at these and most other fine dining Parisian restaurants, and for those lucky enough to secure a table, be prepared for a hefty check at the end of the dinner. Fine dining doesn’t come cheap in Paris.
For those with smaller budgets, there are plenty of other eateries. As originators of street café culture, Paris has plenty of coffee shops sitting prettily behind their pavement tables to satisfy even the most exacting of coffee connoisseurs. Patisseries offer a sumptuous array of deliciously delightful pastries and cakes, while charcuteries hold a wide range of cold meats to go with the famous freshly-baked baguettes from Parisian bakers. Venture down the side streets and alleyways to seek out the hidden restaurant gems.

Whilst Paris does have youth hostels and apartments available for visitors, hotels are the most common form of accommodation, and there is a wide range to suit every budget, from zero stars right up to five. The most basic accommodation, youth hostels or zero star hotels, generally start at around €60 per night, with the five star hotels charging a whopping €500 plus. Check out Paris hotels for customer reviews and details. Best not to leave finding a hotel to the last moment, especially in the high season from April to the end of October. During these summer months Paris plays host to a number of international events such as Foire de Paris, the International Motor Show and an Agricultural Show, which affect the availability of the city’s hotel rooms.

Paris has variable weather, bursting with heavy spring showers, and then having blazing sunshine. Average temperatures for the summer months is 19°C, but Paris has been known to reach as high as 30°C. The cooler seasons, from the end of October to March, average around 12°C, but can be considerably less. Whatever time of year you choose to visit you are sure to enjoy Paris. 🙂

Facebook | Google + | Twitter Stuart Edwards is the co-founder of this amazing blog! He's been travelling since early 2011, and is 100% addicted to coffee and Fail videos.
View all posts by Stuart Edwards →
[VIDEO] Scooter Adventures Around Pai: Poo Dodging and Underwater Action!
Money Saving Tips for Families Travelling this Summer