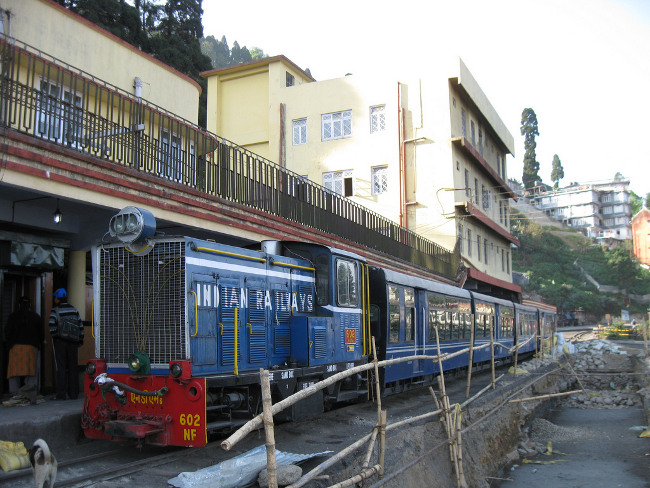 Darjeeling is home to the affectionately known ‘Toy Train’. Officially known as the DHR (Darjeeling Himalayas Railway), the Toy train is a quintessential part of Darjeeling’s history. Since 1999 it’s been listed as a prestigious UNESCO world heritage site. Riding the toy train has now become an essential part of a visit to Darjeeling.

During the British colonial period in India, the toy train line was built to transport everything from supplies to family members up to their quiet hill-station retreat. When the first train set off in 1881, the narrow gauge 2ft track line was deemed an engineering feat due to the route through the steep hills of India’s north-east Himalayas range. Batasia loop is famous for the severity of the incline the steam train must traverse over such a short distance.

During a visit to Darjeeling, throughout the day you’ll hear the faint ‘choo choo!’ as the train arrives and departs. You don’t have to be a ‘train-spotter’ or equivalent geek to enjoy the experience. There’s no shame in enjoying the sights and smells of the steam locomotive; The smoke of the burning coal, the flurry of engineers readying the engine, that ear piercing whistle and plooms of steam shooting into the Himalayan air.

The toy train mainly now runs ‘joy rides’ to Ghum, the highest train station in India at 2225 m (7407 ft). Riding the toy train down directly through Darjeeling, passengers literally pass inches from peoples homes and workplaces. Sharing the road with cars and other vehicles, the steam engine and carriages slowly chug through and out of town.

Locals stop and watch the train go by, almost enjoying the spectacle as much as the passengers; smiling and waving. While the cars and other road goers watch on in frustration as the locomotive stops for nothing and dominates the road. Clearly the superior mode of transport!

There’s a brief stop at Batastia loop to see a large Gurkha war memorial and to enjoy further stunning views of the Himalayas and surrounding hills. Arriving at Ghum, the engine disengages from the carriages and reconnects at opposite end. During the 30minute wait for the return journey, there’s an interesting train museum dedicated to the history of the toy train. Plus there’s time for some piping hot Darjeeling tea and a samosa on the platform!

The downhill return to Darjeeling is predictably a quicker one, with chance to see everything you missed coming up the hill to Ghum. Sit back and soak up the sights and smells of the old train line. It’s easy to imagine riding the toy train in style like the old British officers and gentlemen in days gone by…

How to Ride the Toy Train

The ‘Joy ride’ journeys leave 3 times daily to Ghum, a return trip taking around 2 hours. As of December 2011, the return journey cost 240 rupees. In Ghum, the train museum cost 20 rupees.

This India Mike post has some pretty comprehensive info on the Toy Train’s time tables and destinations. Seat 61 as usual has some helpful advice on trains in general in India.

It’s possible to go further from Ghum to Siliguri at the end of the line. Bear in mind it’ll be a gruelling 7+ hour journey!

Travel Photo of the Day: Piercing Man Meditating at Varkala Beach
Staying at the Hugging Mother Ashram: The Food, The Devotees, The Craziness
A Hug From The Hugging Mother: A First Hand Account
Annoying People You'll Probably Meet When You Travel in Asia

Our Best Travel Photos of 2011
Travel Photo of the Day: Sunset at Puri Beach, India