Kai Pen (river algae), the most unknown super-food is found in the rivers of northern Laos. It’s delicious with it’s distinct salty and nutty taste and crispy texture. Rich in vitamins and minerals it makes a nutritious snack and with no animal content, it’s perfect for travelling vegans!

I first tried Kai Pen at our Luang Prabang hostel on our previous trip to Laos. I have wonderful memories of nibbling on Kai Pen, sipping Beer Lao and enjoying Laos’ beautiful sunsets over the Mekong River. 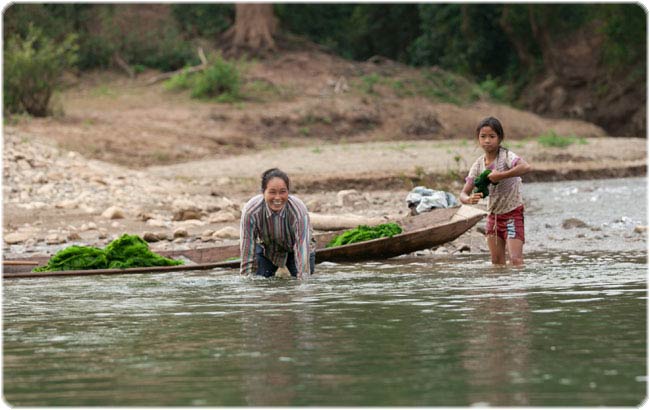 This time on our visit to northern Laos we stopped for a few nights at the sleepy village of Nong Khiaw and took a long-tail boat ride to the even quieter Muang Ngoi Neua.

In these two remote villages in northern Laos we were lucky to see the whole process of Kai Pen becoming a finished product ready to eat. 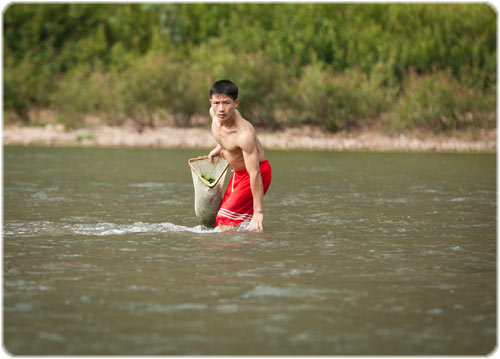 Collecting the river weed from the Ou River

While we were on our journey to Muang Ngoi Neua we were able to take in some of Laos’ river side life. It was fascinating and I felt very privileged to be able to witness locals getting on with their everyday life, on or around the river. 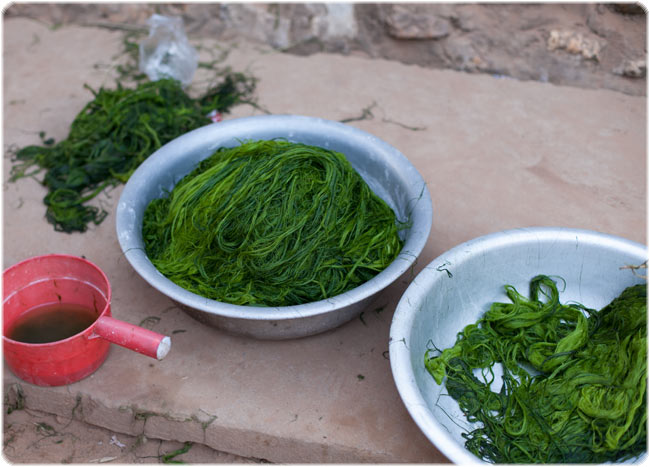 Fresh from the river!

You’ll see Kai Pen swaying beneath the waters current and amongst the rocks in the middle of Laos northern rivers. Local villagers are waist deep in the water and with their hands they pull out the river weed and pile it onto their long-tail boat, or use small fishing nets to drain out the moisture. 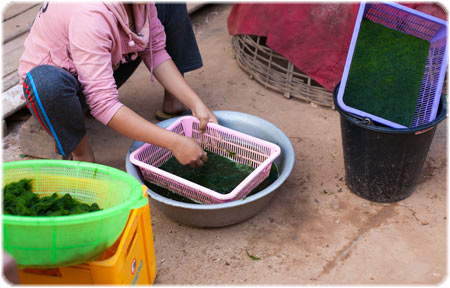 Washing the Kai Pen and pressing it flat 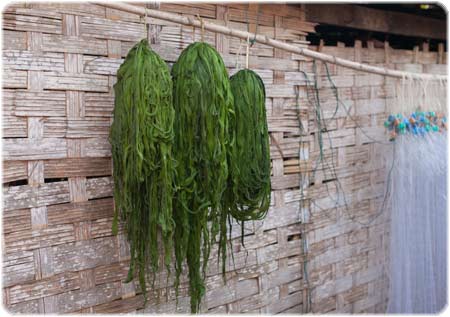 While wondering around the small island of Muang Ngoi Neua, we saw the next process of Kai Pen- preparing the goodness before it it seasoned. The river weed first gets washed out in clean water and then drained. 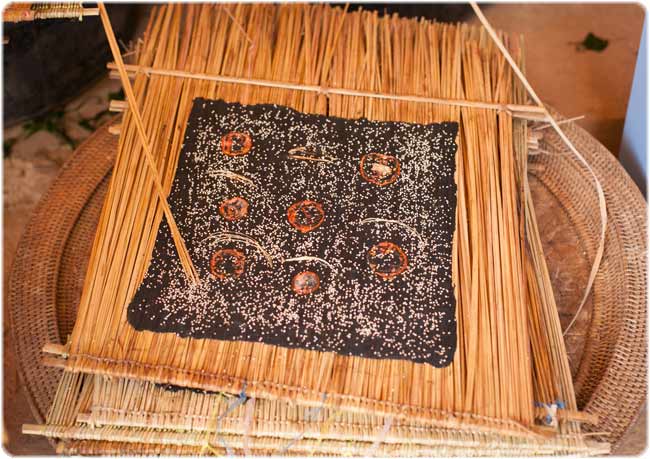 Close up of the Kai Pen, with tomato, onion, garlic and sesame seeds! 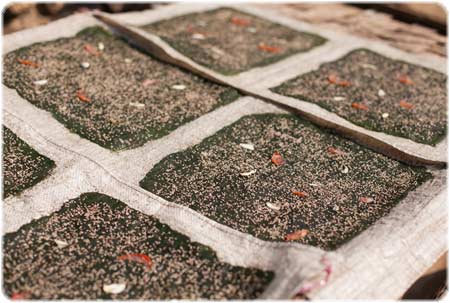 Once it’s prepared, strips of river weed is then laid onto a bamboo frame or if not available, an empty rice sack. To compress the river weed, ladies batter it flat with a stick, so it becomes one large flat piece of Kai Pen. 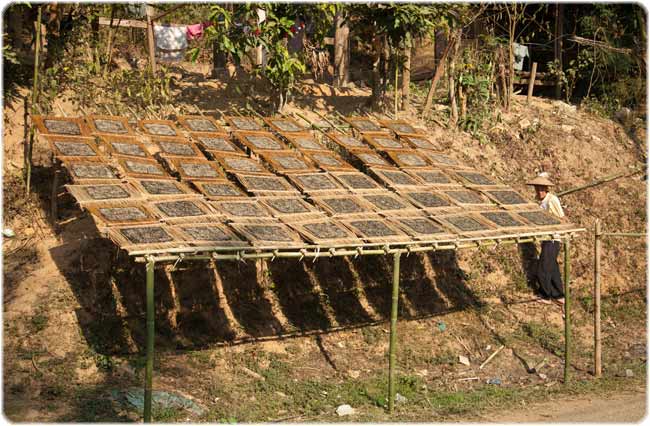 Mass drying in the sun

The river weed then needs to be seasoned to get it’s distinct nutty and garlicky taste. We saw Kai Pen drying out in the sun, sprinkled with slices of garlic, onion, tomato and lots of sesame seeds. 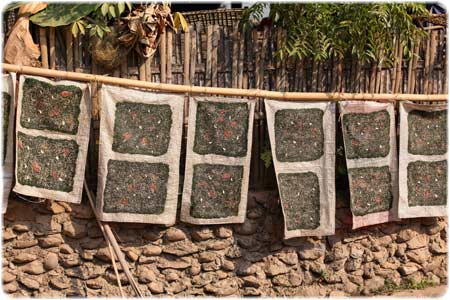 Once the Kai Pen is fully dried out in the sun, it is carefully peeled off it’s bamboo or canvas surface and rolled up and bagged ready to sell. 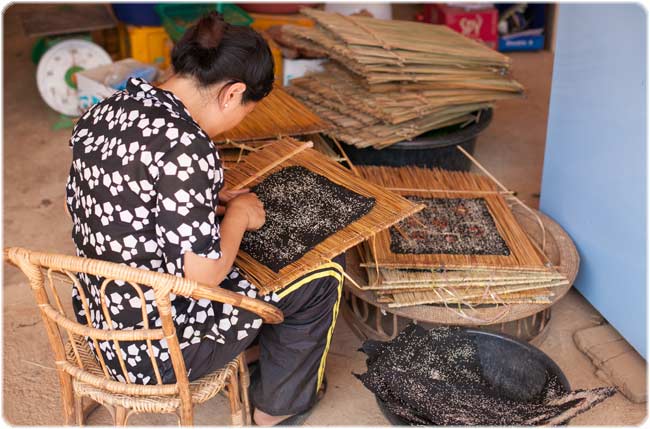 Kai Pen being carefully removed from its bamboo frame

It’s a popular (vegan) snack in restaurants, served up fried and crispy and cut into squares, which makes it great for sharing. I like to eat it with soya sauce and chilli sauce as a dip, yum! It also goes down a treat with an ice cold Beer Lao, watching one of Laos’ best sunsets! 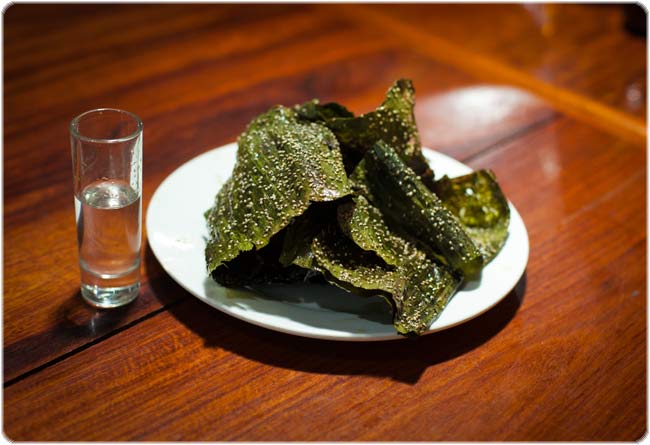 We’d love to know if you’ve tried Kai Pen! And if you liked it!

Travel Photo of the Day: Logging in Laos is Obviously Tiring!
Where Are All The Vegan / Vegetarian Restaurants in Luang Prabang?
Passing Through Pakse? Our 'Stay Longer' Mini Guide!
My Vegan Experience in Pushkar, India

What’s Happened to Muang Ngoi Neua?
Where Are All The Vegan / Vegetarian Restaurants in Luang Prabang?

One Response to What is Kai Pen? The Delicious Vegan Snack from Northern Laos!