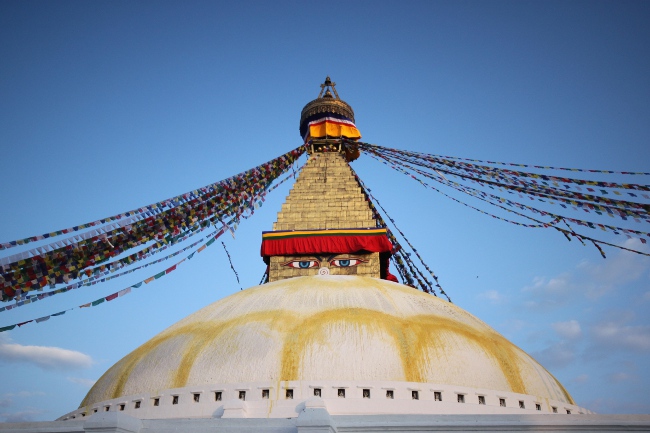 Just outside of Kathmandu, the famous Buddhist place of worship, Bodhnath Stupa lies in the heart of the town. Impossible to miss, the bright white dome draped by hundreds of colourful flags is visible for miles around. A major pilgrimage destination for Buddhists, and extremely important to the Kathmandu’s large Tibetan refugee community.

Eavesdropping on some other travellers, we heard it would be insanity not to miss the full moon celebrations in Bodhnath.

Finding accommodation in Bodhnath hadn’t been easy. We arrived late the previous evening in the dark, and to our surprise lot of places we’re fully booked out. A first during our stay in Nepal. Strange considering it’s off season now and the trekker crowd have moved on. “Why so busy?” we thought.

The following afternoon on our way to the stupa, we noticed we were walking with a considerable amount of monks and general holy people. Arriving at brilliant white structure, we were met by a sea of maroon robes and prayer beads. Our senses overwhelmed by musky incense and the loud bong! ringing out from the huge bell located at the top end of the plaza.

People were queuing up, touching their heads to the heavily inscribed bell, then yanking the bell’s clapper as hard as they could: Ringing out around Bodhnath. Hundreds of pilgrims were walking clockwise around the incredible stupa, chanting and praying rhythmically as they past.

It didn’t feel like an ordinary day in Bodhnath. The numbers kept growing until it was impossible to walk anywhere but clockwise with the masses. Heading the opposite direction would be foolish, and instead of offending the locals, we continued clockwise until we spotted sanctuary and solitude in one of the cafés on the plaza’s edge. A few hours blogging and several coffees later, darkness had descended. We braved outside again. The numbers had died down thankfully, with just a few of the most dedicated pilgrims circling around. Then we both saw it at once. The full-moon we’d expected to see was not full, but halfway eclipsed. “A cloud?” I proposed, much to Eloise’s amusement. Clearly not! 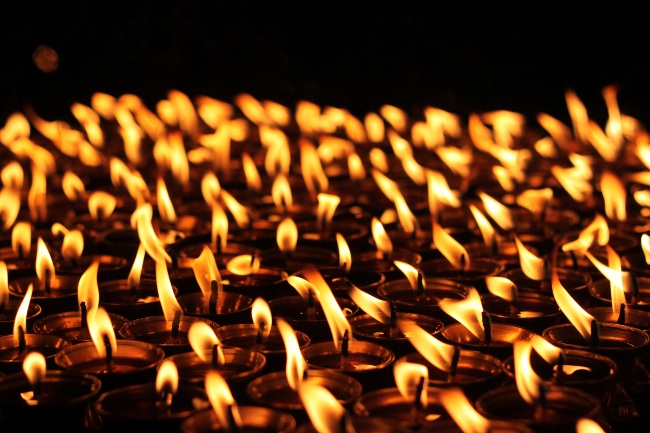 The buttery smell from these candles was incredible!

It was all quite surreal. We had no idea that a lunar eclipse was due, why would we? The moon was so clear and with so little cloud cover. I tried to get off a few shots on my camera, but I’d left my main tripod back in Kathmandu. Using Eloise’s head as stability was doomed from the start. Plus all the smoke from the incense and butter lamps was rising up and ruining my shots. 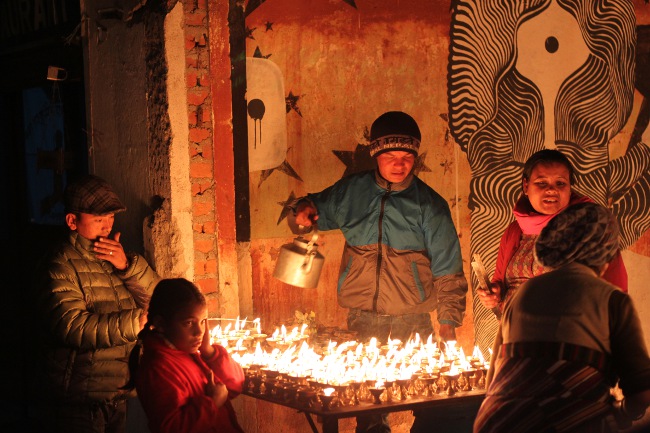 We decided quickly to head back to our guest house which had an open area on the 3rd floor: Perfectly facing the now almost fully eclipsed moon. Thanks to a resupply en route and with the help of an icy cold San Miguel (brewed in Nepal of course), I set up my mini tripod I carry as spare and tried my best to fire off some shots without my telephoto lens. 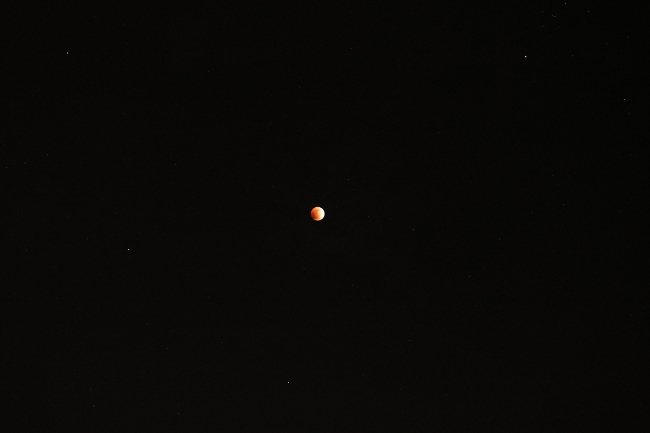 Not the best image, but you can see half the eclipse!

The moon turned black, and I could hardly see it through the viewfinder. Then it seemed suddenly to turn fiery orange, like the sun subdued by a hazy day.

We sat there for nearly an hour in the cold, watching the eclipse moving from one side of the moon to the other. Finally, when a thin, bright strip of sunlight reflected back brightly from the moon, we realised the eclipse was passing. Maybe overly emotional thanks to Mr Miguel, we felt really lucky that we’d seen something special. And completely by chance!

We went back out to grab something to eat, the stupa still had a handful of people circling around. The prey wheels still spinning, with just a low murmurer of quiet chanting as people passed. We saw on the BBC news web page about the lunar eclipse. Only parts of Asia and Australia we’re lucky enough to see it. Us included!

Puri: One of India's Oldest Hippy Hangouts
A Flying Visit to Mumbai and Delhi
Exploring Chiang Mai's Night Markets
Travel Photo of the Day: Chillies Drying in the Sun, Kathmandu