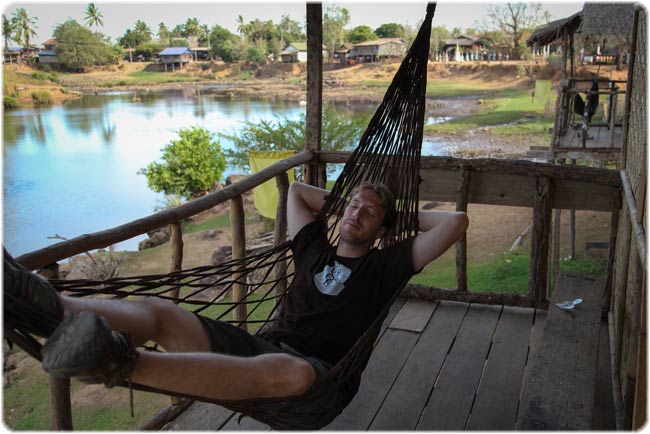 We arrived in Tat Lo on day 4 of our motorbike adventure of the Bolaven Plateau in the far south of Laos. We’d previously heard glowing reports about Tat Lo from others we met around the Plateau, and were looking forward to a day or two of R&R and giving of arses a break from the saddle!

We almost didn’t arrive in Tat Lo, and stayed on the main road near Beng, feeling a bit let down and wondering what the fuss was about! But we carried on and eventually found the right Tat Lo, secured an appropriate riverside bungalow and started relaxing immediately!

Tat Lo is actually the name of a nearby waterfall. The name of the little village where travellers stay is called Ban Saen Vang for the sake of simplicity, I’ll call it Tat Lo!

We felt an immediate 4000 Island vibe in Tat Lo. We stayed for a week in Don Det (4000 Islands) during our last visit to Laos in 2011. Koffie, the friendly local Dutch coffee afficado we met on our coffee plantation tour hugely recommended a visit to Tat Lo and made comparisons between here and 4000 islands – and he wasn’t wrong!

What to do around Tat Lo 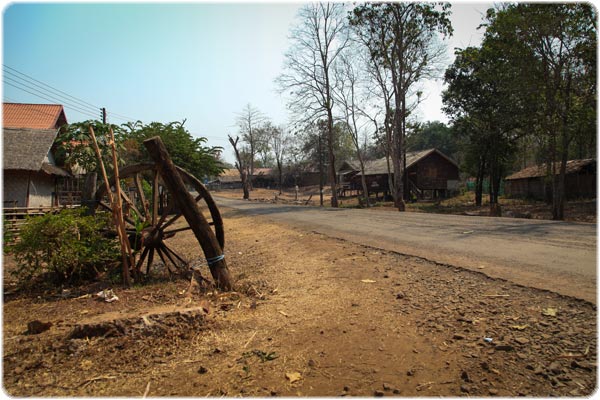 The village of Ban Saen Vang is a little one street haven surrounding the Xe Set river. There’s not that much to do in Tat Lo, but that’s not a bad thing!

The riverside setting in Tat Lo is the main draw, as is the chance to mingle and interact with Lao villagers in their own environment. Or just swinging in the hammock listening to the water rushing from the Tat Hang waterfall.

Up river from Tad Lo

Trekking options are available through the nearby ethnic villages towards the other nearby waterfalls of Tad Soung and Tat Lo. 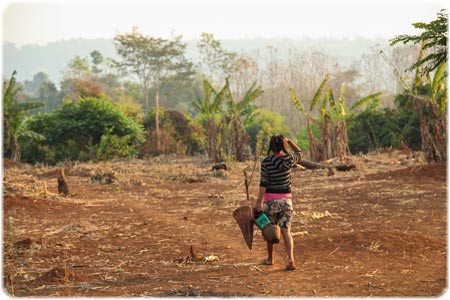 The nearby village of Ban Khiang Tanglae is an easy hike up past the Tat Lo waterfall, 700 metres or so up river. We stumbled upon the village by accident while exploring the waterfall. 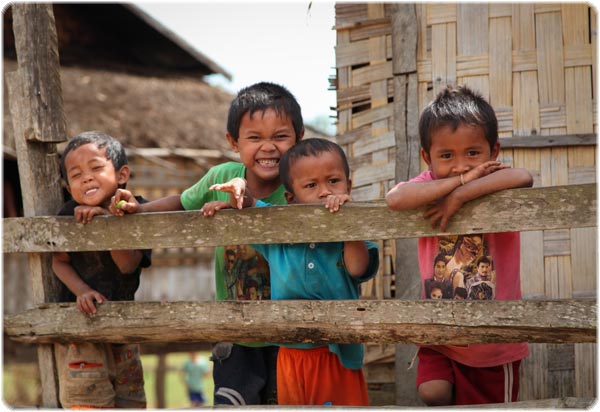 We visited Ban Houay Lanong, 3 km from the Tat Lo Lodge on our final day there. Accessed only by the bumpiest of dirt tracks about 2 km from the main road. The villages were painting and decorating the ceremonial hall when we passed through, adding decorative bamboo and wooden ornaments to the outside of the hall. 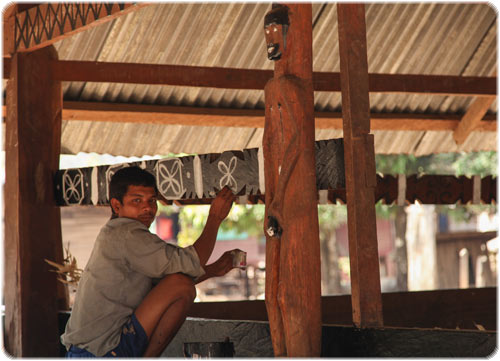 The village children are the most interested in visitors, shouting ‘Sai Ba Dee!’ from their shacks and running out to say hello! Pigs, chickens, dogs and goats roam around while woman smoke tobacco in banana leaf cheroot, preparing dinner and de-shelling peanuts. 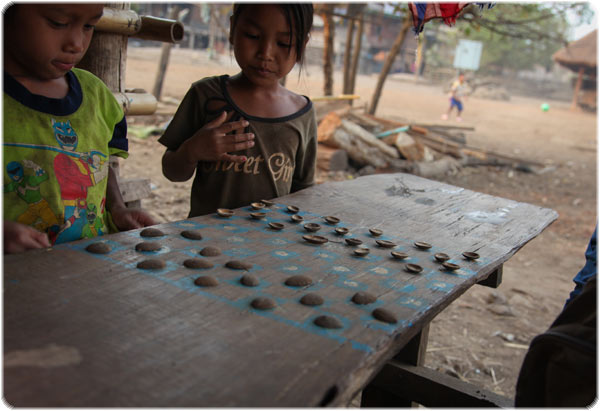 Visiting these villages is like stepping back to medieval times. People are happy and welcoming and intrigued to see you – Just be sensitive as you walk around, and honour their ways. The ethnic groups are mainly Animists and have some strict beliefs and taboos regarding their ceremonial halls in the village centre. Thankfully there was an English sign when we were there!

The tourist information centre in Tat Lo has detailed maps on the local area, and can provide a guide if you want to explore deeper into the village culture. 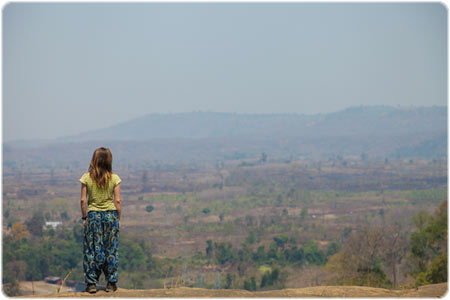 The view from Tad Soung

We went on our motorbike to Tad Soung which translates to ‘Tall waterfall’. It’s spectacular, even though it was quite dry. You can head to the top and enjoy the epic panorama view of the surrounding countryside (don’t get too close to the edge) then head down to the nearby village of Ban Khiang Tad Soung and clamber over huge volcanic boulders to the foot of the waterfall.

On the way to the base of Tad Soung with our guide! 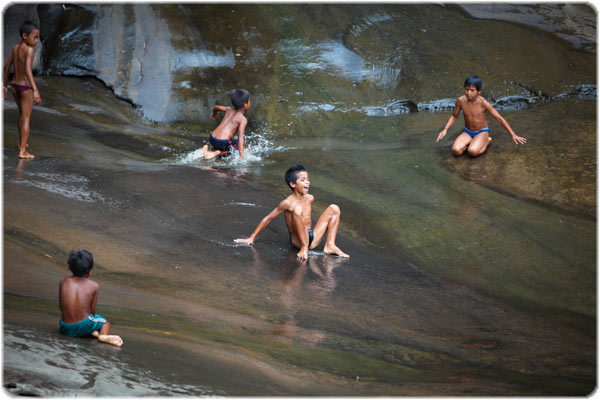 We were followed a group of local boys who showed us the easier, falang way over the rocks. Once there, you can swim in the pool or use the rocks as a slide like the boys did, surrounded by the shadow of the huge rock face and the echos of the falling water.

There are a few accommodation options in Tat Lo, from the beautiful resort of Saise Guesthouse nearest the Tat Hang waterfall, to 30,000 Kip shacks right on the water with shared bathroom and cold water showers. 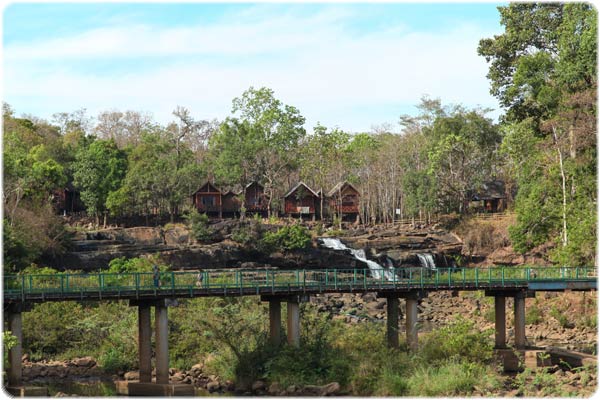 The view of Tad Hang from our bungalow

We stayed in a basic river side bungalow at the Sailomyen Guesthouse, complete with view of the Tat Hang waterfall and the pretty wooden bridge, a hammock and shared toilet facilities. 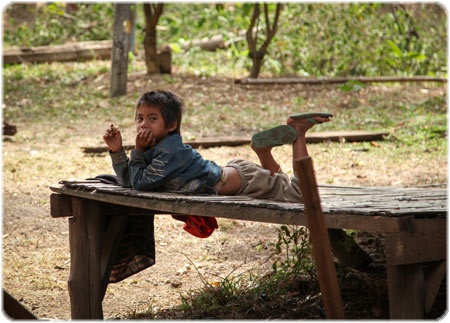 One of the boys at Sailomyen Guesthouse

Palamei and Tim Guesthouse both have Wi-Fi, although Tim Guest House charges per hour and has a selection on computers to use.

Chips with curry? I need a hair cut…

There are several eateries in and around Tat Lo, and most accommodation options have a restaurant of sorts attached. On the main strip, we mainly ate in Jom/Chom, as they whipped up some good veggie options and a pretty good banana coffee shake!

We tried Mama Pap’s, famed for ‘big eats, small kips’ and didn’t get half the food we ordered (a normal trend in Laos) and mama seemed a tad grumpy us with that morning.

There’s a real community feeling around Tat Lo. On our second day our guest house threw a party for a villager who was leaving on a long jounrey. Lao Lao was flowing and the karaoke system was pumping out tunes while young and old all danced around and enjoyed the excuse for another celebration. Everyone was in their hammock or back in their shacks by 11am!

There seems to be a lot of development around Tat Lo, and it’s obviously getting more popular with travellers with every new season. Tat Lo remains off the beaten track purely because of its location on the Bolaven Plateau, but it’s changing fast – with lots of new development on the main street, and some foreign interest in a Thai/Falang run coffee shack and a seperate group of French and Spanish settlers building some new shacks too, all be it without a river view. 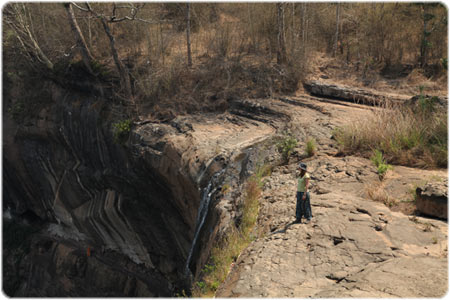 Health and Safety at Tad Soung

If you’re passing through Pakse, then I’d highly recommend a night or two in Tat Lo. It’s about 80 km away, best accessed by motorbike but there are public transport options too.

Tat Lo is a great destination to visit for a few days, and is relatively easy to get there from Pakse and should be a ‘must see’ during your visit to southern Laos.