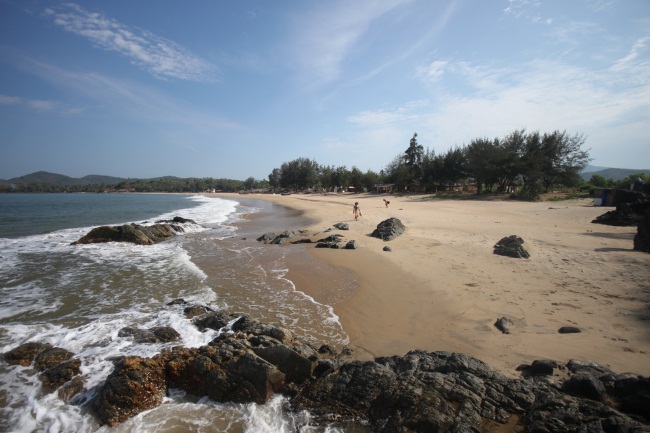 People flock from all around the globe to Goa. As well as being a hot-spot on the traveller trail, it’s also a major holiday and package tour destination. Previously known for legendary all-night trance parties, you have to dig a little deeper now to find out where the action is, but they do happen!

A lingering hippy scene is alive and well in this old Portuguese colony. It’s very relaxing and shanti, and it’s easy to watch the days turn into weeks! Goa has it all. It’s the smallest, but most fun packed state in all of India.

Our first exciting destination in Goa was Palolem Beach. Stu spent a few days on his own sussing out the best places, while I was travelling alone to my Laughter Yoga Teaching Course in Bangalore. 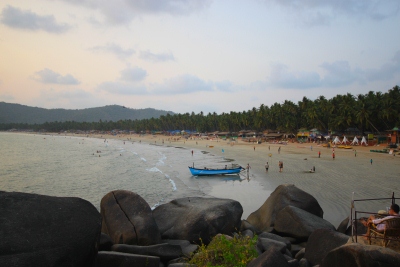 The beautiful crescent shape of Palolem Beach makes it so alluring. Best seen at night from one of the far ends, when everything is lit up and the curve is so striking.

We arrived in Palolem in April, at the end of their tourist season and it was surprisingly busy, especially at weekends with Indian tourists. There are lots of great restaurants and bars in Palolem. Our favourite was ‘Brown Bread and Health Food.’ And yes they do sell brown bread and it’s home-made and tasty! 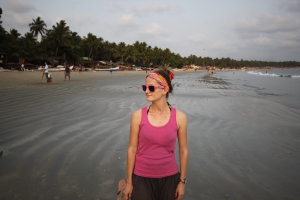 Feeling like an adventure, we hired a scooter and started to explore the surrounding area. Patnem Beach was only a 5 minute drive away, so we started there. We pulled into the north end of the beach and our first observation was how quiet it was. Where were all the people, we thought?

We walked along the sea front, absorbing everything we saw. When we reached the last restaurant we decided Patnem Beach was what we were searching for. 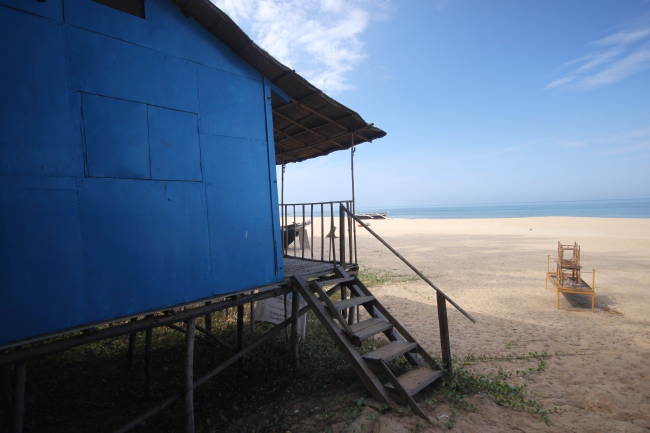 We went to the first place, which was called Solitude and we couldn’t believe our luck! We were offered a beach hut right on the sea front, with the best view I think I’ve ever seen! At a ridiculously low price, we snapped it up straight away. 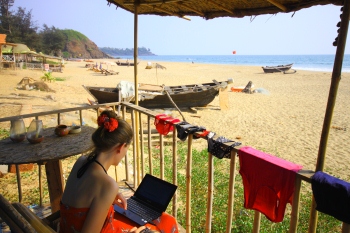 Patnem Beach is everything we were looking for: cheap rooms with great views and a beautiful, quiet beach with not too many tourists. Also after all our bouts of illnesses, clean and hygienic restaurants with a good choice of food was a must!

Unfortunately Stu is ill again. Boooo! This time just to confuse us, he hasn’t got a Delhi belly, but a fever. And in 35+ degrees that is not easy to get rid of! Hopefully he’ll get better soon and can start enjoying wonderful Patnem Beach! 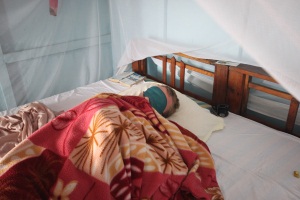 We have made some great friends who were on holiday, mostly Brits coincidently!

We met a couple of lovely London girls. One of them, originally from Canada was possibly the fastest speaking girl in the world! The other had a hilarious potty mouth that would leave us in stitches, but she had the most angelic face to go with it! 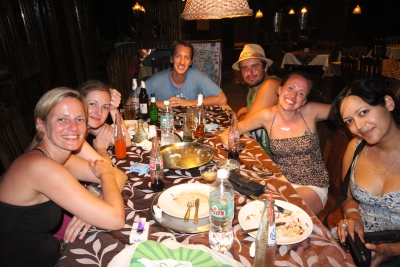 As Patnem Beach is closing for the season and literally folding up around us, we plan to enjoy our little room with a view and quiet beach for as long as we can. If we get moved on we’ll head north up through Goa to see what else this sunshine state has to offer. 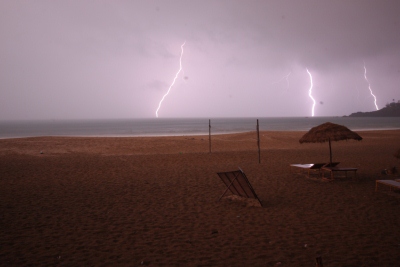 Until then, we’ll see you on the beach!

A Glimpse into Lao River Life - Nong Khiaw to Muang Ngoi Neua by Boat
It's Wedding Season in India!
Our Guide to Maxing Your Relaxing in Nong Khiaw, Laos
Puri: One of India's Oldest Hippy Hangouts

Day 359: A Girl Travelling Alone in India
Travel Photo of the Day: Candles at Buddha’s Birthplace