For any intrepid world-traveller, a trip to Mexico’s capital city is not to be missed. Brimming with sites of historical interest, museums and amazing architecture, visiting the city is recommended to anyone who loves learning about new world cultures and exploring colourful streets in the sun.

Prior to setting off on your travels, make sure you’ve got these travel essentials out of the way first:

Pyramid of the Sun

Believed to have been constructed around 200CE, Mexico City’s Pyramid of the Sun could be one of the oldest and largest historic sites in Mesoamerica. It is the third-largest pyramid in the world, and is surrounded by smaller Aztec structures.

Mexico City is full of museums, but a visit to the museum dedicated to the seminal Mexican artist is highly recommended. Find it in the Colonia del Carmen neighbourhood, Coyoacán, and look for the vivid cobalt-blue building – you can’t miss it! The building was originally the Kahlo family home; but has been dedicated to the artist’s incredible life and works since 1958. 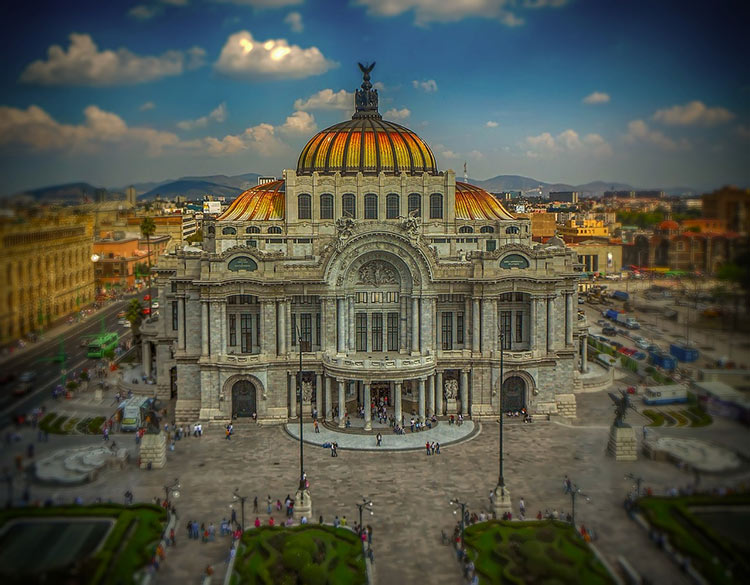 The “Bosque de Chapultepec” (translated to “Chapultepec Forest”) is one of the largest city parks in the whole of the Western Hemisphere, encompassing a gigantic 1,695 acres. For this reason, it’s known as “Mexico City’s lungs” – the forest is hailed for supplying the congested city with fresh air.
Besides relaxing in the park’s open green spaces, the area also features Chapultepec castle, with flower gardens, fountains, and hilltop views providing a stunning panorama of the city; and a popular zoo for entertaining the family.

The opulent “Palace of Fine Arts” is the cultural hub of the city. Not only is the palatial building’s neoclassical architecture spectacular to look at and tour around, but it also hosts the city’s major theatre, dance, music, art and opera events. Book a ticket for a show at the Palacio de Bellas Artes and view traditional Mexican art forms in authentic splendour.

When vacationing with family, a visit to Six Flags will be a big hit with kids and adults alike. Stationed on the outskirts of the city, it’s the most popular theme park in all of Latin America, with 2.5 million annual visitors. Inside you’ll find roller coasters, water rides, carousels, laser tag, and attractions dedicated to all your favourite superheroes. For a fun-filled family day out, plan an excursion to Six Flags México.

Experience Mexican wrestling at Arena México, located in the Colonia Doctores neighbourhood. The popular play-fighting sport of professional wrestling – or lucha libre – is appropriate for all the family. See the colourful costumes and get your photo taken with the stars after the show!

These ancient ruins are influenced by traditional Spanish, Mexican and Aztec cultures, and make up the remains of Tlatelolco, an old Aztec city. The site consists of gardens, ancient stone buildings and places of worship. It is also a site where bloody battles between the Spanish and Aztecs took place and is said to embody a tragic era of Mexico’s history.

The Casa de los Azulejos, or “House of Tiles” is a beautiful tall building constructed of colourful tiles. It looks especially majestic lit up at night, and visitors can find it in the old-town Centro Histórico area of the city. Now, it houses a popular restaurant with quaint courtyard and several shops – but many people visit just to take a picture outside!

A regular guest contributor, Sarah is a travel freak who was a lawyer in a previous life, before semi-settling in beautiful Thailand!
View all posts by Sarah →
Planning a Photography Trip to the Niagara Falls
The Best French Destinations For Foodies