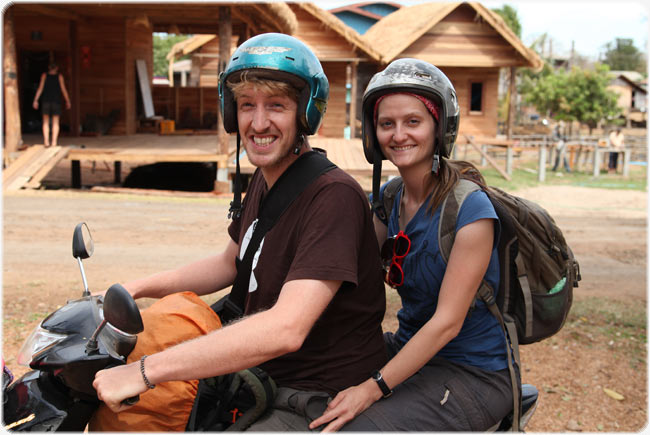 The Bolaven Plateau has always conjured thoughts of amazing fresh coffee in Laos’s main coffee growing region, ethnic villages, off the beaten track adventure and wind in our hair excitement!

We’ve been looking forward to Exploring the Bolaven Plateau by Motorbike for months. It’s something we missed out on our last trip to Laos in 2011 during wet-season, as the roads were awful with horrendous landslides and we didn’t have any waterproofs.

Nothing stopping us this time during dry season!

We’ve written a pretty detailed day by day diary account of our 7 day Bolaven Plateau Adventure. Points if you make it all the way through!

Hopefully there’s some helpful information in there about the route and some of the towns around the Bolaven Plateau. 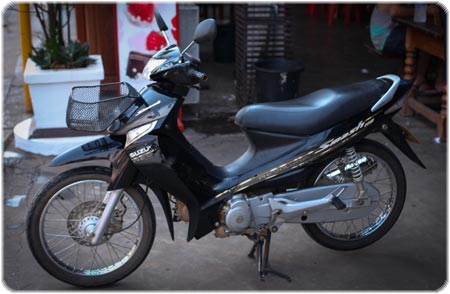 When we arrived in Pakse we tried to hire a decent motorbike. I wish we could be back on a roaring Royal Enfield, India style, but budget dictates. So instead we opted for a Suzuki Smash 110cc with a nice little basket on the front!

Check out the info at the bottom of the article before heading out to the Bolaven Plateau.

View The Bolaven Plateau Loop! in a larger map

Coined as ‘The Big Loop’ We rode from Pakse stopping at Paksong via some beautiful waterfalls. Then from Paksong to Attapeu via Tha Taeng and Sekong, then Attapeu to Tat Lo, staying put for a few days in Tat Lo before heading back to Pakse. 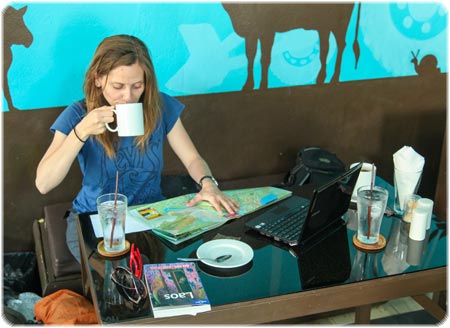 One last coffee and a look at the route ahead!

Set off late as per usual, stopping off for one last coffee in the Bolaven Café on the main strip for last minute route checking and photo opportunities! 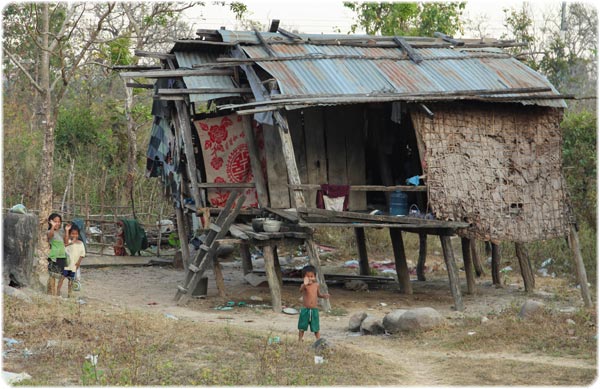 As soon as you leave Pakse along Highway 13, you’re thrown back into rural Laos. Wooden stilted shacks, wandering chickens, children playing Takraw, adults coming back from the fields… 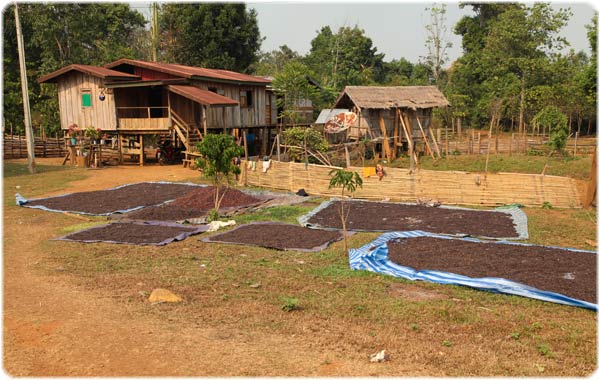 Beans drying in the sun

We soon started seeing more and more signs of Bolaven Plateau’s main export – Coffee! We saw countless coffee berry piles drying out in the hot sun along the road. People even grew coffee bushes in their gardens, fenced off from the hungry cows!

We stopped off for our first taste of Bolaven Plateau coffee at a road side shack at a little fair trade place near the sign for E-TU Waterfall. We sampled a short pokey Arabica, mine with sweet condensed milk (in true Lao style!) and Eloise’s black. Washed down with a complimentary tea! The E-Tu waterfall wasn’t in our guide book, and we decided not to go in and to keeping riding on. 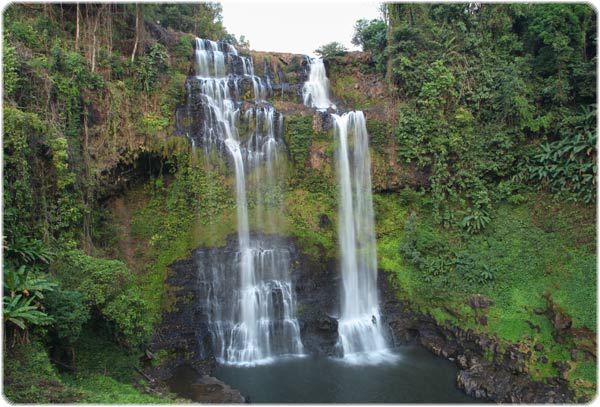 Tat Yuang waterfall was a few kilometres closer to Paksong. The waterfall is signposted 1 km from the main highway down a bumpy, dirt track. Entrance is 10,000 Kip, not 5,000 as mentioned in the 3 year old Lonely Planet, and 3,000 for the motorbike.

At 40 metres high Tat Yuang waterfall is a beautiful sight – Even in dry season! You can head down onto a wooden walk way for some good shots, or head down to the water. Bust out the swim gear and dive in! You can always swim in the pools at the top of the waterfall, we didn’t but it looked OK! 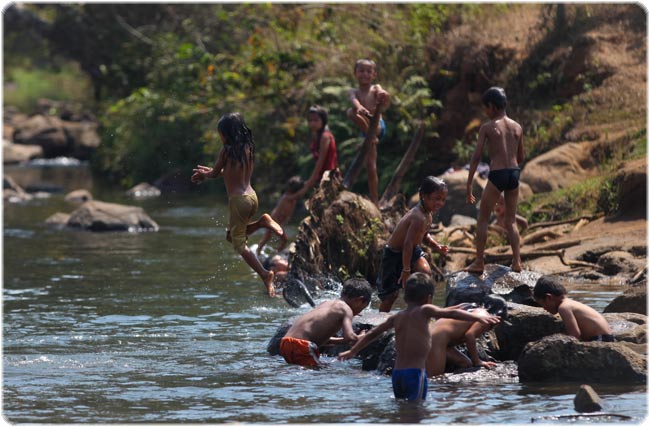 We arrived into dusty and relativity low-key Paksong just before dark. There was some sort of washing-up liquid festival going on which was quite bizarre on the main field near the market. We found this Paksong map pretty helpful, showing some guest houses and bike repair places, as well as our pal Koffie’s website, www.paksong.info. 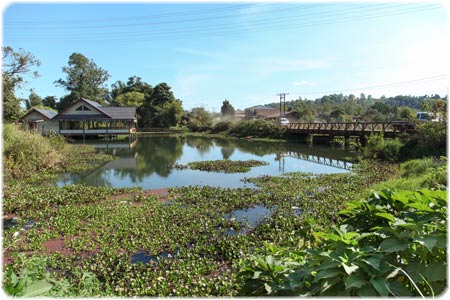 The view from the Savannah Guesthouse

After getting lost for a bit, we rolled into the Savannah Guesthouse at around 6pm; checked into a 80,000 Kip room (Hot shower/TV), washed off the dirt, grabbed some dinner over the road in one of the family run restaurants and turned in ready for an early start tomorrow!

It’s about 50km from Pakse to Paksong, the roads are paved – but there are still a few nasty potholes around so keep an eye out.

Day 2: Paksong and a Coffee Tour!

We’ve heard of a chap called ‘Koffie’ who lives in Paksong – A Dutch expat, coffee lover and connoisseur who runs a coffee shop in town. We called him up and he mentioned he operates 50,000 Kip coffee tours, teaching about the workings of the Bolaven Plateau coffee industry, about the local area, the farmers and everything else coffee related! 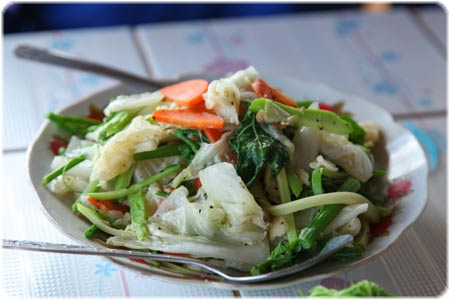 The MOST boring dish I’ve ever eaten.

After the healthiest, and probably the most boring breakfast ever of boiled veg and rice, we decided to back track to the Tat Fan Resort, where Koffie has a stall.

Check out our Coffee Tour with ‘Koffie’ on the Bolaven Plateau article for more coffee related antics!

A Long day of riding today. We started early and went for morning booster coffee at Koffie’s place. Stopped for Pho and fried noodles and veg at Tha Taeng. At this point we could have either headed further north towards Tat Lo waterfall, but instead decided to blast it to Attapeu via Sekong.

The dusty ‘short cut’ back to Pakse

We had reservations about travelling to Attapeu, as several people we’d spoken too previously mentioned that the town is in the basin of a valley, and regularly gets up to 40+ degrees in dry season. 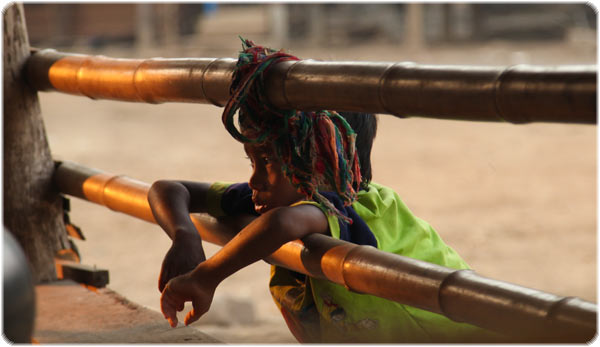 The village life on the Bolaven plateau is one of its best features. Seeing the smiling faces of the children as they wave at you riding past, it’s a great feeling – and very humbling. 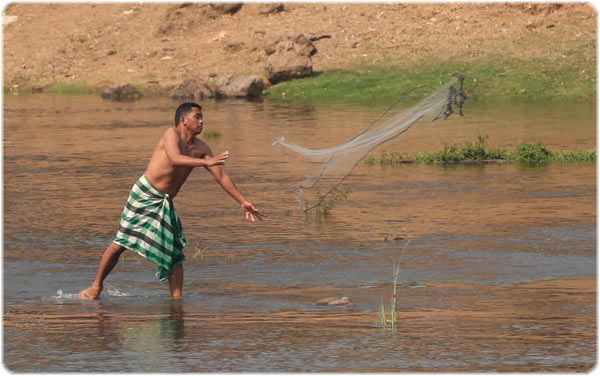 We saw a couple of boys crash their bike going into a corner too fast over sand. They literally picked themselves up of the red sandy floor, dusted themselves of smiling and laughing, checked their bike over and jumped back on it and rode off – True Lao style!

The ride was incredibly hot today, even at speed on the bike we could feel the sun’s heat on us. We hit some road maintenance a few kilometres outside of Sekong, meaning massive potholes, dust and big rocks. 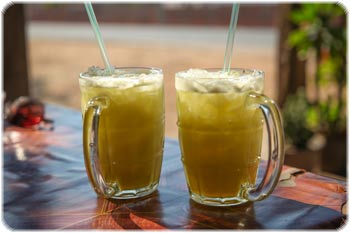 When we reached Sekong, we quickly stopped at a set of bizarre statues of ethnic villagers. The sun was beating down, so we pulled in for some fresh sugar cane juice, and some interactions for the local wildlife!

Juiced up and cooled down, we pushed on to Attapeu, a good 80km+ from Sekong. The road was spectacular, but we had to go a bit faster than we wanted to beat the setting sun, pushing the Suzuki to a vibration inducing 80kph! 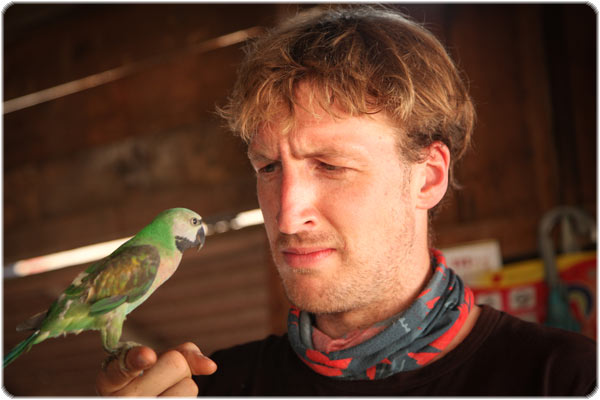 A battle of wits!

The locals living alongside the road come to life as the sun sets and the air cools- Boys run alongside their tyres with sticks, girls and boys play volley ball and boules, adults swing in hammocks enjoying some sticky rice and a Beer Lao. 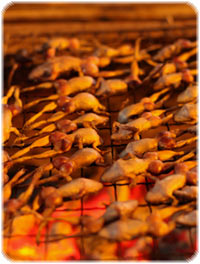 Throughout the day, the vibe has become ever more Vietnamese. Eventually leading to full Vietnamese signage everywhere you look, with some token Lao language script thrown in.

Timing it perfectly once more and arriving before the sun set over the mountainous plateau, we arrived in Attapeu.

Attapeu is the first main town after the boarder from Vietnam. It feels like Vietnam – The locals drink from the traditional and iconic coffee filter, Com Bo and Pho is on every menu, everything is written in Vietnamese. What little Lao we knew went out the window, our tones or accent falling on Vietnamese tuned ears. We didn’t know whether to speak Lao, Vietnamese or English, we even tried a bit Thai! 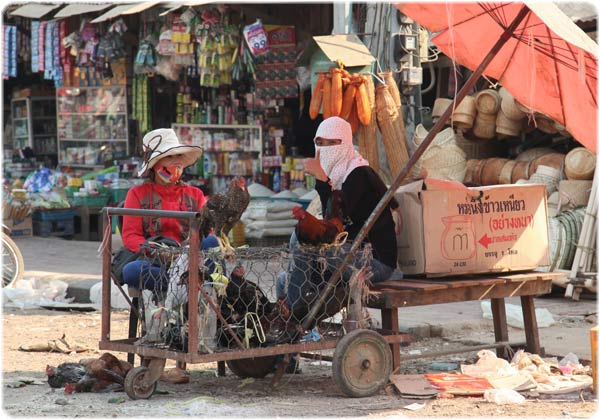 Our first thoughts were that Attapeu isn’t a tourist friendly place. After watching the sunset with the locals over the river, we drove around for a while to try and find a restaurant with a menu so that we could convey that we wanted something vegan. We were outright refused entry in a couple of places; even one mentioned in our guide book, and we eventually landed at a restaurant run by ‘Mr Touk’ on the bank of the Sekong River for a much needed meal. 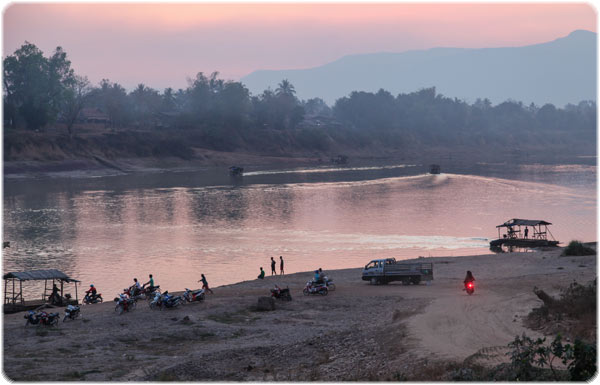 We stayed in the Phongsang Guesthouse (60,000 Kip/Hot water, TV), owned by a lovely Vietnamese woman, who seemed genuinely disappointed that we ate Lao food rather than Vietnamese for dinner! We promised to try Vietnamese tomorrow…

Check out Exploring the Bolaven Plateau by Motorbike Part 2 when you’re done here!

And see our other Bolaven Plateau related articles if you haven’t already!

Practicalities of Travelling around the Bolaven Plateau by Motorbike

– Road Conditions
The main highways around the Bolaven Plateau are in excellent condition, 99% of the time. Potholes and general surface issues can be a problem, as can sudden road works, and dusty unsealed dirt tracks.

– Repairs
Every township or village has tyre repair shacks should you get a puncture. If you can get to one, someone will help you out. It seems to be a common occurrence for the locals so try not to panic. Petrol stations are very common, and in the more remote stretches of highway, old style pumps can be found alongside bottle of petrol in case you run out! If in doubt, just top up again if you’re doing a long stretch.

– Safety
Other bikes. The Lao don’t race (the majority anyway)! But they’ll double up and ride alongside each other chatting, so give ample overtaking space. Watch out for Hilux and Landcruisers speed-freaks bombing past you, double overtaking a bus and a bike on a bend. On day 3 alone we saw a giant bus towing another one with full cargo of people and supplies, and a truck towing a car using a large piece of bamboo.

Rogue cows, goats, chickens, dogs and children all have a mind of their own, so don’t get too close!

While I’m not a motorbike mechanic, I’ve ridden enough bikes to know a bad one.
As least ride the bike down the road before you commit and hand over your passport. The Bolaven Plateau is a bit bumpy in parts, very if you decided to really go off-piste. So make sure you get the right bike.

Chose a bike with new looking tyres. The bare minimum you should check is that the brakes work, all the lights function and it starts up OK. There are loads of motorbike hire options around Pakse so shop around and you’ll be able to find a nice looking bike. We found 100cc semi auto Honda/Suzuki – 50-60,000 Kip per day, 110cc semi auto Honda/Suzuki 60-70,000 Kip, Automatic ‘twist and go’ scooters 70-80,000 Kip. Lanham Hotel hires out larger 225cc Honda FTR ‘Trackers’ for a 240-280,000 per day, and advertised 250cc motocross style bikes for 350,000, but they didn’t have them when we visited.

-GT Rider Map, or at least a print off on the highway numbers and town names. You can buy these in major towns in Laos, definitely in Vientiane and Luang Prabang.
-Sun cream, sun glasses, a Buff for keeping the dust out.
-Earplugs
-Jumper/Fleece for night time – Paksong is up at 1200m!
-Swim wear, in case you want a dip at Tat Lo or Tat Fan
-Helmet. Or a donor card.

The Ultimate Guide to Killing Mosquitoes
Riding the Samoeng Loop, Chiang Mai
Travel Photo of the Day: Morning Views of the Mekong River on Don Khong Island, Laos
Free (or really cheap) Things to do in Hong Kong

4 Responses to Exploring the Bolaven Plateau by Motorbike! Part 1