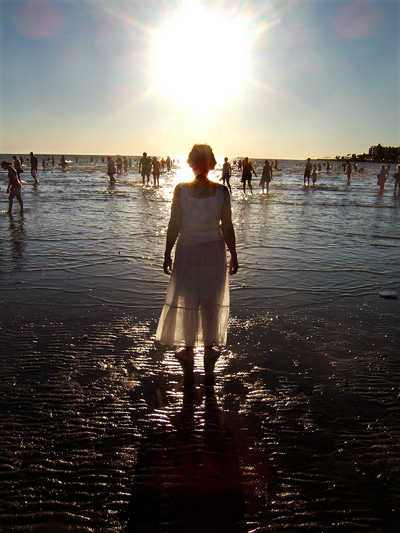 This post follows on from the previous A Hug From The Hugging Mother : A First Hand Account, where we arrived at the ashram and received a hug from Amma.

During our stay at the Matha Amrithanandamayi Ashram, we had queued up and received our hug from Amma, a living, breathing spiritual figure.

With our hugging experience complete, we could settle in more and relax into the day to day living at the ashram.

Day to day life at the ashram is highly focused around a strict schedule. Depending on whether Amma’s around or not, Darshan (when you can get a hug) tends to throw these plans.

Life is based on quite a strict timetable for Amma’s loving devotees at the Ashram.

So there’s quite a lot to fit in in the average day! No wonder everyone seems so stressed out…

During your time here, you are expected to perform Seva (they’ll stick a reminder on your door if you don’t!). The ashram is self-sustained mainly by the international residents. The vast clerical work, cooking, the food preparation, working in the various shops, washing laundry, recycling, making brochures, gluing envelopes, cleaning, and sweeping is all undertaken daily by Amma’s worshippers.

After breakfast, we were sat with our friends Jake and Sophie who we met in Varkala. One of the devoted volunteers approached us with a whiteboard listing a selection of Seva jobs on it. Gardening in the Spiral Garden didn’t sound too bad, so we all signed up and looked forward to getting our hands dirty!

We reported to a nice skin-head woman from Denmark at the Spiral Garden. Glad she had two strapping lads on hand, she tasked Jake and I with a couple of manly jobs. We were to head to the beach, collect ‘the wagon’, load it up with 2 full dustbin sized buckets of smashed coconuts, and 2 full buckets of bricks so they could build a little rockery for the trees in the Spiral Garden.

It was at least 35 degrees.

We secured the wagon with minimum effort from the recycling Seva area, perhaps with a few funny looks from various bald and baggy white clothed women. We loaded up the coconuts and rolled out of there, stopping off at the building site to pile on the bricks.

Suddenly a woman approached us and said,“Just what the hell do you think you’re doing?” Jake and I looked at each other.
“You can’t put bricks in there! On whose authority were you told to put bricks in there?! Take them out right way!”
It turned out that this foul tempered devotee was the Seva recycling boss.

Trying to keep our cool, we said that the nice Danish lady had told us to do it. She was clearly very upset that we had loaded bricks into her buckets.

Then in a moment of fury, she grabbed one of the buckets and tipped the bricks all over the floor! I had to jump out the way to stop my foot getting crushed! “What the f**k are you doing?!” I shouted.

Reporting back to our boss at the Spiral Garden and not feeling very spiritual, she said that the recycling lady sometimes ‘gets crazy’. Hummm.

Maybe she needs to get herself to a peaceful retreat to find herself and control her anger… wait a minute.

After venting our anger by smashing up some coconuts and decorating the trees from where they fell, our Seva was complete and I could relax again. Well, try to anyway.

Food is served 3 times a day at the ashram. Free food is offered to all those who stay there. It’s pretty basic by normal Indian standards: Rice and daal with a couple of curries etc, but you can’t complain!

The paid food in the Indian and International canteens are a step above! Exceptionally cheap, all proceeds go to the Amma Foundation Charities. The Indian canteen churns out masala dosas, vadas, idlys and bhajis for under 10R each. Being a vegetarian environment and run by westerners, the International café sells some excellent international fare at cheaper than cheap Indian prices.

They serve up classics like mashed potato, wholesome soups, olive and focaccia breads (real bread!), cauliflower cheese, pizza, pasta and quality coffee. And best of all for Eloise, a comprehensive section of vegan cakes and treats! You should have seen her face.

It’s a totally self contained community. They have doctors, laundry services, a library, a bank, travel desk, and a swimming pool (no mixed swimming, women must wear a gown). Plus mobile phone outlets and shops selling western goodies for those missing creature comforts. 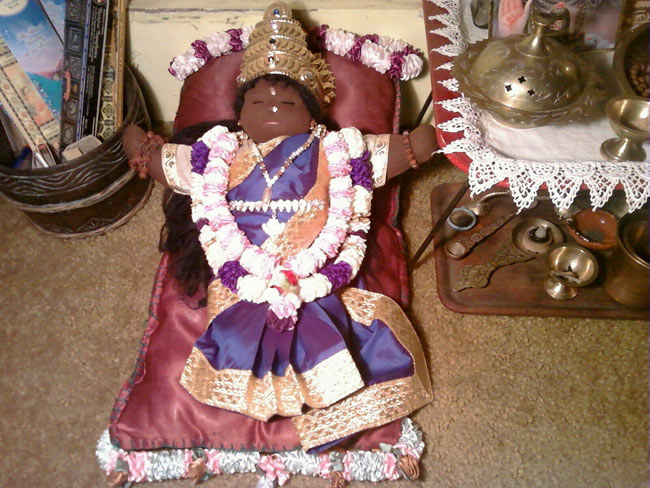 In one of the ashram shops I noticed Amma dolls were available to buy. Other holy figures like a mini Jesus and Shiva and Krishna dolls were also there completing the line up. Comically extortionate, check them out here.

Here’s some funny and interesting excerpts from the ‘Playing with God: The Amma Doll Story’ leaflet I picked up from one of the shops:

“It wasn’t too long afterwards that I began to realise that it wasn’t me designing the doll – but the doll herself was deciding how she wanted to be made.”

“When we see our Amma doll, we think of Amma; we can hug and kiss Her, dress Her, sleep with Her, and play and talk to Her. When you sleep with an Amma doll, and awaken in the middle of the night still half asleep, your mind wonders, “Where is Amma? Did she fall? Is she getting squished?” I hear our children call to their dolls in the night, “Where’s my Amma?” So even in our sleep, our mind is still on Amma, and when we wake up, there she is.”

“Devotees have stories of the Amma doll giving Darshan to many people of buses and planes, from Catholic nuns to a full compartment on a train in India.”

For a place that’s supposed to be spiritual, it’s certainly filled with a lot of angry people. During our 5 day stay, it felt like the ashram functioned the same way I’d imagine any other closed western environment to work. With people getting stressed out and annoyed with the repetition of daily ashram life.

India is a pretty hectic country, and I think some people have forgotten where they are. Like the shoe collection woman getting irate because the Indian devotees weren’t lining up their shoes properly, or the lady fighting to control the flow of people going into one of the shops with a broom handle, screaming “Give me space! Give me space!“. Or the over-emphasis on robotic queuing and conformity throughout the complex. As a Brit, I naturally love queuing, but this trait is yet to be discovered in the rest of India. 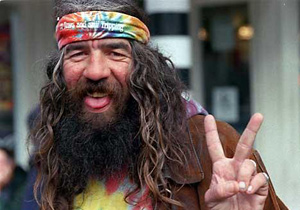 People are ambitious, and people will always try for the ‘top’ jobs. If you work hard enough at the ashram you too can be in the presence of Amma!

There are people who have obvious mental problems here, and the ashram provides a place to live and exist and feel part of a community where they probably wouldn’t be able to function elsewhere.

Then there are those who believe that Amma is the real deal, and worship her. And there are people passing through like Eloise and I who just want to see what all the fuss is about.

There’s no doubt that Amma isn’t a special person. Her whole life has been dedicated to others, literally providing a shoulder to cry on for millions around the world.

I was glad to have left the ashram. I apologize if I’ve offended any devotees out there, but it’s just not for me. Preferring reason and common sense, maybe I lack the spirituality needed to see beyond my scepticism of people worshipping a plain simple person.

It’s all a bit too much like a cult for me.

There. I’ve said it.

Go even if it’s for a couple of days on your travels through Kerala for a cheap bed and some good food. You’ll leave with an interesting view into the lives of the dedicated worshippers and devotees of The Hugging Mother!

This post follows on from the previous A Hug From The Hugging Mother : A First Hand Account, where we arrived at the ashram and received a hug from Amma.
Photos: Worshippers by Vince Alongi, Amma doll by Goblinbox, Eyes by Mike Licht.

A Hug From The Hugging Mother: A First Hand Account
The Negative Side to Travelling #2: Finding a Bed to Sleep in Every Night

5 Responses to Staying at the Hugging Mother Ashram: The Food, The Devotees, The Craziness