During our final days in Patnem on the glorious palm fringed beaches of southern Goa, we went to our favourite café for a morning coffee.

“They’ll be using all the cafés bandwidth” I grumbled to Eloise.

Then something clicked in my mind – I recognise these guys from somewhere!

I signed into Twitter and searched out Val. With her back firmly to me and engrosed in some heavy blogging, I fired off a tweet to her…

Like some deranged cyber stalker, I watched the tweet pop up on her screen as she turned around to see two grinning strangers looking at her!

After the panic had died down, we exchanged pleasantries, excused ourselves for our creepiness, and had a nice chat about the trials and tribulations of India! 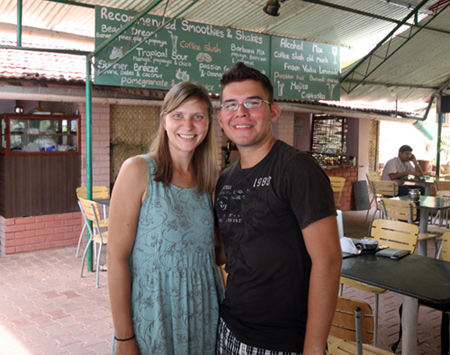 After another coffee and a bit of travel blog chatter, we went our separate ways and headed back to the beach while they planned out their trip to beautiful Hampi!

@sillyamerica @BAbackpacker Great meeting you guys! So random! Haha! It was so funny watching Val turn around like “wh what?!” Small world!

Goa Beach Dogs
What Is It Like Staying With Nomads In Mongolia?

4 Responses to The Day We Met Val from Silly America.com and Jaime from Breakaway Backpacker.com!